A customer dropped this stapler off because it would no longer staple. I determined it was probably not going to be economical to fix; partly because it would likely be outside of an IT guy’s expertise, and also because I could not get the bugger apart using traditional IT tools.

Rather than just bin it outright I decided to take a destructive route to disassembly first, and let F=MA plus concrete take care of that.

It came apart with a few sudden strikes to the garden path from 3 metres; destroying some plastic end pieces in the process.

Anyway, the long and short of it is that this stapler uses a spring and lever to rapidly fire a metal plate onto the staple. Thus, this metal plate takes significant forces from two spring-ends that fit through holes towards it’s base, and in this instance it appears the metal plate became weakened over time and eventually broke into two pieces as shown below.

A skilled metalworker could probably produce a new plate, but not I. 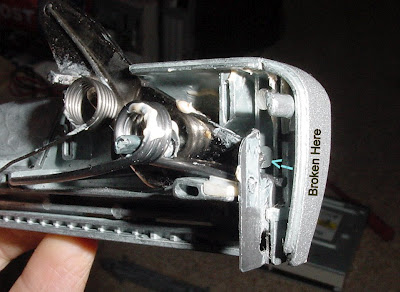 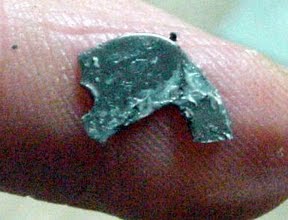