This morning I made the tough decision to have Heppie put to sleep. I had hoped that she’d die peacefully in her sleep during the night, but instead laboured breathing made it sound like that was not likely to happen – she was just too determined to keep ticking despite her problems. 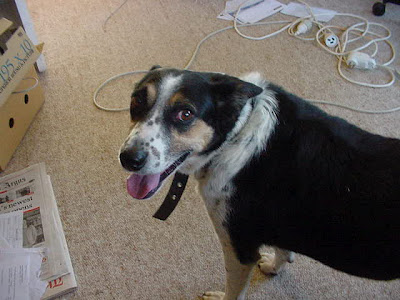 It was clear that her condition was terminal, and although she was deteriorating quite slowly compared to what the vet expected, it wasn’t getting any better – and with no energy to walk more than 20 metres and 48 hours without a #2, it seemed likely that things were shortly going to get a lot worse.

So, at around 11:30 this morning, she was put to sleep. It wasn’t as easy as I’d hoped – they tried twice to put her to sleep in the Kingswood, but in the end because her blood pressure was so low they had to take her inside and use a different type of injection method. Nonetheless she seemed pretty relaxed about it all which was I guess as good as I could have hoped for.

I then took her home, dug a resting place, and later that evening we buried her – near the front gate because she always loved traveling and although presumably her body no longer contains her, at least if it did, she’d be in that happy place between car and home. 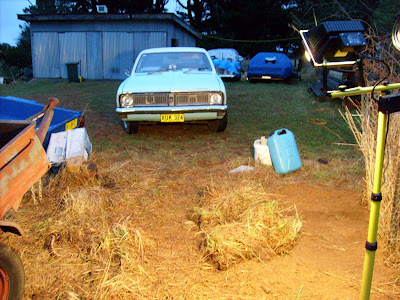 Now of course, grieving continues – raising as it always does the inevitable questions that no-one seems able to answer, like why are we here, is there an afterlife or some sort; along with the more localised thoughts like did I look after her well, was it the right decision, where did dogs come from anyway, etc.

I guess multiple religions have been invented around these themes, but at the risk of upsetting those of you who have decided; I’m yet to be convinced. I have taken some comfort in other people’s near death experiences, but that still doesn’t really qualify as scientific evidence – interesting as they are. Like Einstein lecturing to a budgie, the world may be too big for us to understand.

In memory of Heppie, I created a one page document which I buried with her in a glass bottle, and because I’m a techy guy I also burnt 5 copies of a CD of pictures of her life, sealed them in the plastic spindle with silicon and included some dessicant silicon in the package. Odds are no one will ever find them, but who knows – and if they do will they even know what a CD is? (This was inspired by a recent post on a website where someone had written a missive about their pond and buried it thereunder, said letter berating the pond violator for choosing to remove said pond.)

Following is the text of said letter, along with a link to some of the pictures that were included.

Heppie was found at Mays Bend in Bourke, NSW around 2008. She’d had puppies and appeared to have been dumped. She found me, Michael Kean, sleeping in a car because I was not in the mood for fishing.

She lived in Bourke for a couple of years, had a number of puppies there in one litter. She lived outdoors.

She lived at Green Creek near Fords Bridge for a couple of years – again as an outside dog.

She lived at Fords Bridge for almost a year – again as an outside dog.

She then moved here (Black Mountain) around 2002 and was at last allowed to be an inside dog – all other properties were rental, etc. Her life really began here!

She miraculously survived a roll of a ute as she was flung off near Brewarrina, and her leash snapped due to the force. She was found two days later on a nearby property, to great relief.

Every day from 2002 on, she’d accompany me as I carried out computer repairs in the local area – occupying the back seat of the 1971 Kingswood. (Front seat for the last two weeks.)

She went with us on many holidays to Coffs Harbour, South West Rocks, Golden Beach – and was always a ‘car dog.’ There was nothing she liked more than travelling, although she preferred utes to cars.

In July, 2008, she began to become less spritely – would not run up and down the road any more with the electric scooter. A test at the vet showed she had a red blood cell count of 12, where normal is 35-57. The vet was a little surprised as it seemed she should not be alive at those levels.

She survived another two weeks, but could not walk more than about 20 metres before freezing on the spot and having to be carried. She would still travel happily each day and was now eating luxury food only – chicken from 627 café, steak and kidney pie, home made stews, and mars bars.

On 24/7/08 I took the painful decision to have her put to sleep, because her quality of life was diminishing further – she was still a happy dog, but sleeping was becoming more difficult.

She was a great loved friend for many years, and will be sorely missed.