For many years I used a program called Big Brother to monitor the history of connections for a number of host computers. However it was only compatible with Windows 98; so to keep using it I had to run it in a virtual machine.

Well the good news is that it’s been upgraded to be compatible with XP and possibly higher.

It’s different to things like Ping Plotter in that it basically just shows you the history for the last x minutes or hours for a your specified servers. 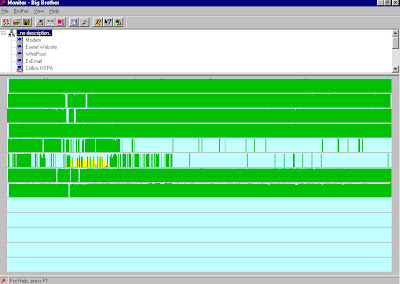 You can see here for example that many of my hosts are offline and have been for the last four hors, and a couple are having a tough time with wireless broadband connections that aren’t working well.

Their webmaster appears to have an amusing sense of humour 🙂

See the E-Bike Tuesday night.
Update on Microsoft’s Free Antivirus
Short Rant on Greed.
DIE-alup.
Windows 7 is out 🙂
In the Holiday Mood – KeyBored.

A couple of newsletters ago I hinted that I was installing an electric bike kit that weekend. A surprising number of my customers are alternative energy / green types, and others are prolific bike riders, so I have chatted with a few people about it. One of them has invited me to show it at some “open forum” thing in Armidale on Tuesday night, where there will be a display of electric cars and bikes. ( More info on this event is at http://transitiontowns.org/ArmidaleNSW/ArmidaleNSW )

So, if you’d like to see what $429 buys you in the electric bike conversion kit department, or to check out what people with more money than me have been up to with their electric cars, drop in to the Kent House carpark at 6:30 Tuesday night.

It will probably be on the back of the Bluebird all Tuesday so you might also see it in the main street of Guyra.

My review of the kit itself is at http://auzzie.net/files/ebike-info.pdf

Oh, and if you’d like to see a 9kg easyish to carry bike in a bag that costs $3,500 and is illegal in Australia due to our slightly backward laws on these things, check out http://www.yikebike.com/site/home

I was considering selling the bike kit as a retailer, but have decided against it due to possible legal liability if someone installs it poorly then blames me! However, it’s an opportunity if anyone is interested in it 🙂 The nearest rivals in Armidale are double the cost.

I see AVG’s up to their usual tricks, trying to force users into yet another new version of their now rather slow program. So a reminder that there is a free one from Microsoft, and a free one from Avast. Last newsletter I praised the Microsoft one for being a good product. It is 🙂 But the one downside with it that has come to light is the size of some of its update files. They can be in excess 30MB every few weeks; so if you’re on a really slow connection this could be an issue. Avast updates are much smaller but of course they require the 12 monthly free registration.

Last week, a customer was caught in a booby trap that was set by Microsoft back in the year 2000. (Subsequently removed in 2003) This trap is that if you store more than 2GB of email in Outlook 2000, it will crash; taking your mail with it. (In this case, about 17,000 emails.)

I’ve heard of this glitch in the past, but most people have upgraded to newer versions of office since then; so I’d never actually enountered it first hand until this day.

Microsoft fortunately had a solution that was supposed to work, but was a bit hit and miss and quite time consuming to run. There were many other companies peddling solutions to this problem as well; and for some reason they were almost all identically priced at $49.99 US, with a couple up as high as $250+

It annoys me somewhat when people do this. My opinion is: If you consider how vast the world is; if you create some simple tool that can do the job, sell it for a small amount and you’ll make it back on volume, and for the greater good of humanity. If instead you stick a high to ridiculous price on your software, people will just go straight to mininova.org or thepiratebay.org and solve their needs that way.

This practice has at last caught up with the likes of NavMan and Garmin, with Google now announcing that their newest mobiles will include fully functioning turn-by-turn navigation GPS built in for free. NavMan in particular I’m glad to see now suffering as their update price of $160 for new maps can not be thought of as anything other than a rort.

For those of you who have been holding off buying a new computer because you couldn’t stand Vista, the good news is that Windows 7 is out. It uses about half the memory of Vista, and is not really all that much different to XP. The main difference is that the task bar now has buttons instead of long tags. I have it on my laptop so if you’d like a preview, flag me down 🙂 As per the ‘greed’ article above, however, it’s a bit overpriced to upgrade from XP and Vista.

I received a notice last week from M2 Wholesale that advises that I am no longer commercially viable for them and that I have 90 days left before our contract terminates.

What this means is that I will soon cease offering dialup internet services under my own brand. Instead, I will be migrating the service and customer balances over to another company, Beagle Internet. They have some of the best rates going for dialup, are active and well respected in the whirlpool.net.au community, and because they are also an M2 Wholesale customer they can take over the operation seamlessly. They have offered to maintain the same accounting methods as Auzzie Internet for the migrating customers – accepting cheque payments and not expiring credit.

Auzzie Internet started as a dialup business in November 1997 charging $2 per hour for Internet service in Bourke, NSW. At its peak it had 24 lines. (22 at 33.6k and 2 at 2.4k for prolific chatters) The dialup service was outsourced to KBS Internet around 2002 when wide area numbers were introduced. KBS was taken over by WCG (Wholesale Communications Group) who in turn was taken over by M2 Wholesale. At this point we’re now down to just 6 lines.

Please note that this only affects dialup customers. Wireless Internet, ADSL and Web Hosting is not affected 🙂

Christmas and the holidays are coming soon. The next newsletter will contain a collection of things to keep you amused!

Now, if you want to play the competition, you’ll need to download “KeyBored” instead. (Although it might drive you mad heheheh.)

Free from http://www.mediafire.com/download.php?y1zwtzzwhyk (You will need to unzip it and run keybored.exe) Only tested on XP. Then, open Notepad or Word or a blank email and type away 🙂

Once you have KeyBored running, you can then learn to play the songs at http://keybored.wikidot.com/system:keybored-songs by typing the letters.

Old Editions
You can find old editions of this newsletter on the CCC Blog. http://auzzie.net/cccblog/